Necessity: the Mother of Investment 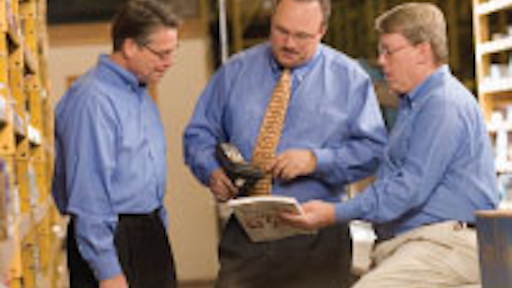 Publishing may be as old as Gutenberg, but industry players today are finding that they must be prepared to invest in modern management systems to compete effectively. In the case of Ware-Pak, a Chicago-based third-party fulfillment company for the publishing industry, investing in a new warehouse management system (WMS) has allowed the 43-year-old business to move from surviving to thriving in this complex, fast-moving market.

The Need for Change

Back in 1999 Ware-Pak was using homegrown systems, combined with a good deal of paper-driven, ad hoc, manual processes, to manage operations in its 170,000-square-foot distribution facility. While these solutions might have been adequate in years past, by the time Keith Shay came onboard the company as president in 1998, the legacy systems and processes were proving unable to keep up with the evolving demands of the company's customers.

The root of the problem lay in the increasingly complex nature of the publishing business. Ware-Pak serves as a distributor for publishers, taking in shipments of goods — books, textbooks, CDs and other materials — from the publishing houses and then repacking and sending them out to retail outlets as necessary. Ware-Pak also handles the disposition of returns coming back in from the retailers, so it must offer its customers a robust reverse logistics capability as well.

In a business with increasingly rapid turnover and an ever-expanding number of stock-keeping units (SKUs), the company's legacy systems and processes couldn't provide Ware-Pak's customers with the accuracy, speed and visibility to inventory they were requiring. "There was just no way we could continue to provide the level of service that our customers were looking for with the system that we had in place at that time," according to Shay. In that light, the business case for investing in a new WMS was quite straightforward. As Shay puts it, "We had to make a change for survival."

Ware-Pak surveyed the WMS market and came up with an initial list of 20 solution providers offering various systems. Through a series of telephone interviews, the company whittled down the "shortlist" to eight providers, which were then asked to make full presentations of their solutions. Ware-Pak also went on site tours at reference customers to review the different systems in action.

Top requirements for the new system included the ability to handle high volumes with rapid turnover — Ware-Pak handles close to 17 million books a year, with about 2.5 million returns — and the flexibility to handle a variety of picking paradigms — by the unit, case, pallet and truckload — to accommodate different customer requirements within a multi-client warehouse environment. The system also had to allow Ware-Pak to assemble, reliably and accurately, the "kits" that customers require, with books packaged in a specific order for ease of placement on the retail shelf, along with point-of-sale displays or other accompanying promotional materials.

At the end of the selection process, Ware-Pak opted to go with a solution called IRMS from Integrated Warehousing Solutions (IWS), based in suburban Chicago. Shay says that the IRMS system met Ware-Pak's complex requirements, but it also offered a user-friendly interface that could be customized for employees whose first language was not English. In addition, Shay says that a deciding factor for him was the personal approach taken by Carl Brewer, president of IWS. "Frankly, he's the reason that we selected IWS in the beginning," Shay says. "Whenever you deal with him, if there's an issue, he doesn't care what the issue is or who the issue's with, he just wants it fixed and he wants to move forward with things. That's very, very refreshing from an IT vendor."

Installing the WMS at Ware-Pak's facility took a few months, but deploying the system was just the start of the implementation process. Ware-Pak took a phased approach to moving its customers — seven at the time of the deployment — onto the system, beginning with just one, assessing the lessons learned and then moving onto the next client. IWS assisted in bringing the first couple clients onto the system, after which Ware-Pak was able to work largely on its own to configure the business rules within the system to meet the specific requirements of each additional customer.

The hardest part of moving to the IRMS solution, according to Shay, was simply adopting standardized processes. "We've never been a company that's been really big on having written procedures, but moving to a warehouse management system requires that you do things in a very consistent fashion," he says. "It forced us to write specific procedures for every step of the way, and we found that our ability to do things the way that we felt like doing them on any given day went away."

This transition to standardized processes required a change in how Ware-Pak's staff approached their work. "We had to instill a lot of self-discipline in ourselves to not take shortcuts," Shay says. For example, with the new system, Ware-Pak deployed wireless, radio frequency (RF) scanning units to direct employees' picking routines, and staff had to become accustomed to following the prompts provided through the units. Shay says that while Ware-Pak's warehouse employees were trained on the new system and many were able to adapt to the new rigor imposed by the WMS, some staff did have to be replaced.

Brewer, IWS' president, says that his company's customers often go through a culture change as they deploy a new warehouse management system. "When you're putting in a best-practice solution, it may be telling people to put inventory in a different place for travel path optimization and labor utilization, rather than the place that people were used to putting it," Brewer says. As a result, employees must learn to trust the new system, even if they don't always see the logic behind the instructions coming out of the WMS.

Ware-Pak's short-term pain of having to document all its warehouse processes, however, produced the long-term gain of a higher degree of control over the ongoing operation of the distribution center. For example, the system now allows the company's managers to track the movement of every employee in the warehouse facility throughout the course of the day so that resources can be directed from one line to another based on the number of orders that are open at any given time. Supervisors can do a sort on outstanding orders, identify the priority orders and direct resources to process overnight shipments first. The system has also allowed the warehouse staff to focus on getting orders prepped for the different carriers — such as UPS, DHL, FedEx or the U.S. Postal Service — depending on each carrier's pickup time at the facility. That has allowed Ware-Pak to increase its same-day shipping averages to 90 percent, with 98 percent of orders shipped within 24 hours. The increased control over operations has had other positive effects, including improved shipment accuracy, according to Shay. "Before, we were probably between 87 percent and 90 percent accuracy," he says. "With the new system, our quality now fluctuates between 99.7 percent and 99.9 percent. It's just given us incredible quality performance." In addition, Shay estimates that Ware-Pak has been able to reduce its labor costs by almost 25 percent, even while bringing on additional clients, thanks to the increased efficiency engendered by the new system.

The company's customers have benefited from the new WMS' ability to provide inventory and order information through an online interface. "Our clients no longer have to call us to check the status of an order," Shay says. "As their customer service people are talking to their customers, they can go online to our ‘virtual warehouse' on the Internet, look up an order and see exactly what is the current status. Our customers love it." Indeed, this new level of service has helped Ware-Pak increase its customer base from seven before 2000 to 84 today, including several big-box retailers.

Looking back on the implementation, Shay says that the only thing he might have done differently was to put greater emphasis on standardizing and documenting the company's processes before deploying the system. As it was, it took nearly two years for Ware-Pak to fully set its procedures in stone, and Shay believes that the company could have made that much more progress had it done the documentation beforehand. Beyond that, Ware-Pak's president suggests that executives at other companies preparing to go through similar implementations maintain an open mind about new ways to leverage their system. "They'll be so amazed at how much more control they'll have over the organization when they finish that it'll be worth any difficulties they go through during the implementation," Shay concludes.

Founded in 1963, Ware-Pak, based in University Park, Ill., provides third-party fulfillment services to the publishing industry, offering customized packaging, mail order and e-commerce order fulfillment, catalogue and book distribution services, as well as assembly, storage and returns processing. The company has experience handling CD, book, catalogue and wholesale distribution for a variety of publishers and their retail customers, including major big-box retailers. Ware-Pak handles more than $170 million in sales on behalf of its customers annually.


Companies Mentioned in This Article