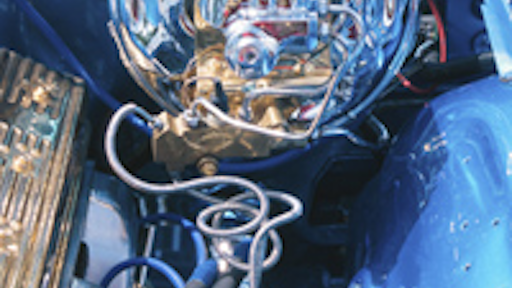 In the fall of 2004 Visteon was searching desperately for a new supplier for the unitized center bearing (UCB) used on Ford F-150 trucks and the new Mustang. It was re-sourcing the UCB because the previous supplier had serious quality problems, which exposed shortcomings in its inventory control and increased the potential of future warranty costs to Ford.

ByTec, Inc., located in Clinton, Mich., pitched to Visteon that it could handle the business. ByTec knew it had the experience and ability to make the part, but Visteon demanded more than production capability. It wanted proof of a strong traceability system before awarding the work. Taking up the challenge, ByTec turned to a Web-based manufacturing execution system from Plexus Systems to help the company establish the process and inventory control it needed to win the Visteon business.

The UCB is a combination bearing/vibration damping device that bolts to the frame of rear-wheel-drive vehicles, limiting driveshaft bowing and vibration. It's critical for reducing noise, vibration and harshness (NVH) and, ultimately, cutting warranty costs. ByTec management knew it could not afford to take on this difficult, high-liability business without a strong system to protect the company, something that would provide the tools needed to identify and correct material and manufacturing issues that had been inherited along with the existing design.

In 2004 Ford announced that it intended to charge suppliers for half of the overall cost of a product recall and would deduct the money from the supplier without negotiation. Do the math on those warranty costs, and it's no wonder Visteon was all ears when ByTec promised every part it shipped would have a unique identity with full traceability back through the entire process. Quickly limiting the scope of any problem is key to minimizing the potential damage and cost.

ByTec was established in November 1985 to design, test and prototype electro-mechanical and electronic products for the automotive industry. The company, located in Clinton Township, Mich., became part of GR Investment Group, Ltd. in 1996.

Success or Failure — Traceability was the Key

Visteon's previous UCB supplier could not provide the necessary process and inventory controls to address the part's inherent challenges and almost went out of business trying. Its quality problems began when a rubber bushing sometimes became too hard, which reduced the UCB's damping ability and allowed normal driveshaft vibrations to be transmitted into the passenger compartment.

Since each part was labeled with only a Julian date, all parts marked with that date were suspect. Even if all the UCBs from that day were contained, there was no traceability to ensure Visteon that parts produced in the days before and after shouldn't be contained as well. This resulted in large and expensive containment campaigns whenever a problem occurred. Even more importantly, there was nothing to help the supplier understand, contain and correct the root cause of the problem. The supplier chased the problems for months, spent millions of dollars — and eventually cried uncle.

To address this challenge, ByTec adopted Plexus Online, an on-demand information system for manufacturing companies that includes a manufacturing execution system to manage the part serialization, direct part marking, component tracking and control, quality management, statistical process control (SPC)/measurement data tracking, and part traceability. For every individual piece in the field, Plexus Online now provides the production date/time, the machines and operators that made it, the in-process measurement data, the supplier and serial numbers of the components that went into it, the steel chemistry of the raw material, and additional relevant information.

Using Plexus Online, ByTec certifies the quality of each UCB, provides traceability back to each subcomponent and manufacturing step, and delivers the statistical capability of each container of parts. If any problems occur, they can be tracked down, understood and permanently corrected in a systematic way.

The original approach to the ByTec project involved laser-etching an encrypted serial number of each part directly onto the steel surface of each part. However, the laser-etching did not survive a 96-hour salt spray test and other reliability checks. Plexus eventually solved the problem using a specialized Mylar label from 3M with advanced adhesive properties that enabled it to stick to metal. The label approach turned out to be far less expensive (requiring a label printer instead of laser equipment), and, most importantly, the specialized label passed all reliability tests with flying colors.

Each part is identified with a unique serial number. The serial number is encoded into a specialized symbol called a glyph, a unique symbology from InfoGlyph USA. Similar to the standard data matrix symbology, this square, two-dimensional bar code contains the information ByTec needs to identify and track the part, encrypted into a unique mark. One of the advantages of the glyph symbol is that up to 80 percent of the mark can be destroyed and it can still be decoded.

Another advantage to the glyph being encrypted is that it offers counterfeit protection, helping to address another growing problem in the automotive industry. The encrypted serial number allows ByTec and Visteon to verify that it is a genuine Visteon part and not a knock-off. This ability further helps with warranty costs. OEMs are finding it increasingly unpalatable to pay warranty, quality and safety costs on the failure of components that they didn't even make. The Plexus Online solution, combined with the InfoGlyph technology, solved that problem for ByTec.

Inventory control is essential, but quality starts with engineering and quality planning, and it continues with the implementation of process control on the shop floor. At ByTec, the Plexus Online system controls the engineering specifications (dimensions and tolerances), the routing, the approved machines, the failure mode and effects analysis (FMEA), and the control plan, the setup and operation instructions, and all other aspects of the manufacturing process.

In the past, in a typical manufacturing company, the control plan was a piece of paper or an Excel spreadsheet that the quality manager updated the night before an auditor came. It served no real purpose other than to pass an audit or hoodwink a customer. With Plexus Online, the control plan is an integral part of production and actually controls the process on the shop floor. The quality documentation is not an after-the-fact nuisance, but the mechanism by which the parts are made.

With the Plexus solution, operators on the shop floor use a touch screen called the "Control Panel." This acts as a sort of "operator portal," providing the operator an easy-to-use interface with everything he or she needs to do the job properly. The Control Panel provides information to the operator, but it also controls incoming source material and outgoing production, validates tooling and fool-proofs the process.

Via the Control Panel, the information in the control plan is displayed as operator check sheets that provide setup instructions, process instructions, measurement data collection and SPC. The check sheets also support pictures and drawings, color coding and other features to make them even more effective.

"The Plexus Online system prevents us from working on a part unless everything is properly set up, the correct raw material components are present and all our inspections are done," said ByTec's quality manager. "I know it sounds simple and like it's common sense, but it's a big reason why we are not making the mistakes of our competitors."

Barcode labels and handheld scanners are also an important part of every Plexus Online implementation, enabling operators and material handlers to quickly and efficiently move materials around the shop floor. In less than a year, the quality performance (as measured in parts-per-million defective) has been reduced from over a thousand in 2004 with the previous supplier, to six ppm in 2005 with ByTec. A part that was a costly struggle for another company has become profitable for ByTec. Moreover, the combined capabilities of process control and traceability have allowed ByTec not only to produce the UCB without major problems, but also to make multiple design changes that have radically improved the part's performance.

Having succeeded with the initial goal for the Visteon UCB, ByTec and Visteon are now planning the next phase of the project, which involves tying the UCB serial number to the Ford vehicle identification number (VIN). In addition, ByTec has recently re-sourced the components of the UCB, including the rubber provider, to companies that also utilize Plexus Online. This will allow the UCB components to be traced not just within ByTec and Visteon, but across the entire extended supply chain.

With the success of this first traceability project, ByTec's OEM and tier-one customers are indicating that more business will be forthcoming. Most recently, ByTec has decided to move forward with a full implementation of Plexus Online across its entire organization, so that Plexus Online handles all its manufacturing lines and manages all aspects of its business — from shop floor to top floor.