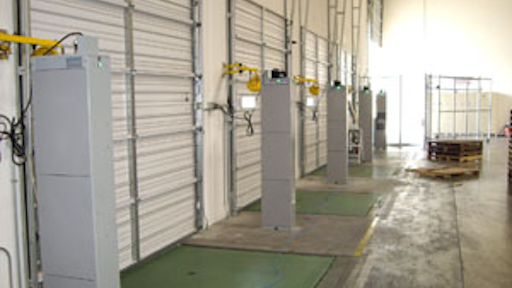 California-based Megatrux Inc. has equipped five of its dock doors with Motorola RFID readers, which scan the pallet tags as shipments are loaded onto the trucks at its Rancho Cucamonga facility.

The hype around radio frequency identification has largely died down as companies either have figured out that they're not going to get swept up in one of the much-publicized industry mandates (think Wal-Mart and Department of Defense) or, conversely, have gotten down to the hard business of figuring out where exactly they're going to be able to mine real value out of RFID technologies. In response to frequent reader requests for examples of where RFID value is to be found today, we present here three case profiles from the public, logistics and consumer products sectors.

Even though vacationers can leave the world behind and enjoy the mid-Atlantic slice of paradise that is Bermuda, the nation has budgetary requirements that must be met and essential government services to provide, such as the registration of motor transport vehicles.

About 8 percent of the roughly 47,000 vehicles on the Bermudian islands are unlicensed, and the Bermudian government decided to implement an RFID-based wireless solution to track and enforce vehicle registration across the nation.

McLean, Va.-based MIKOH Corp., which creates tamper-evident RFID tags and labels, says electronic vehicle registration (EVR) has been shown to enhance registration enforcement through the use of RFID in addition to traditional paper-based forms. EVR tags are monitored as vehicles pass under readers at normal driving speeds. Readers can be placed at tollgates, underpasses and other convenient locations to automate the monitoring and enforcement of registration compliance. Additionally, law enforcement personnel may be equipped with handheld readers to interrogate tags while documenting traffic violations and other traffic stop encounters.

Part of the reason for Bermuda using such a system was that it fit well into plans to streamline current licensing initiatives. Leveraging online vehicle registration, an EVR tag can be updated remotely and without a visit to a registration office to reflect the vehicle's registration status, and therefore remove any false positives. With six reader sites in four major chokepoint locations around the country, the government of Bermuda is due to recoup its initial financial investment within one year of deployment. Over the next five years, recouped revenues will total an estimated $11 million, with additional benefits accrued through ensuring that vehicles have had appropriate environmental and safety inspections.

Third-party logistics (3PL) providers, like California-based Megatrux Inc., are also partaking of the benefits of RFID for themselves and their customers.

At Megatrux's new company-owned facility in Rancho Cucamonga, Calif., the company has initiated RFID tagging, tracking and quality control services from Montreal-based Ship2Save for two customers that are shipping goods to Wal-Mart. The Ship2Save solution is deployed in conjunction with fixed and mobile RFID readers from Motorola and RFID label printer/encoder labels from SATO America. The RFID system is integrated with enterprise resource planning (ERP) and transportation management systems (TMS) from TMW Systems.

As shipments arrive from the two participating suppliers, the Ship2Save software generates electronic product code (EPC) Generation 2-compliant labels using a SATO RFID printer. These labels are applied to both cases and pallets of product before merchandise is moved to storage locations within the warehouse. Employees use a hand-held Motorola RFID reader to scan the pallet tag and a bar-coded location label. This data is then transferred wirelessly to the warehouse management system (WMS) so that the pallets can be located for outbound shipping.

The RFID tags not only include EPC identification numbers, but also tracking information relevant to the shipping history of the merchandise, such as production facility/lot number, item number, ocean bill of lading manifest information, warehouse entry/exit gate, warehouse bin location and shipping purchase order. When orders are shipped to retail customers, each carton is tagged again with an RFID plate that is then scanned onto master outbound pallet labels.

Megatrux has equipped five of its dock doors with Motorola RFID readers, which scan the pallet tags as shipments are loaded onto the trucks. Large LCD display screens mounted nearby provide a confirmation message as each pallet moves through the portal, as well as alerts if a pallet is loaded onto the wrong truck. Scanning the outbound RFID tags prompts the system to close the order, adjust inventory, send advance shipping notices (ASN) and issue customer invoices automatically.

By automating the shipping and receiving process, Megatrux has been able to improve order accuracy and operational efficiency, and provide a real-time audit trail to reduce shipment disputes and chargebacks. The company estimates it will save between $50,000 and $100,000 per year at the Rancho Cucamonga facility (its busiest location, which ships more than 1 million cartons to Wal-Mart annually), and Pelle hopes to expand the RFID deployment to other Megatrux facilities for additional applications. Megatrux customers also benefit from RFID through real-time tracking of their inventory and compliance with retailer mandates.

Easing the Grind of Compliance

A secret recipe of spices sets sausage maker Odom's Tennessee Pride apart from its competitors, but its logistics operations set it apart from other companies that need to provide RFID shipping labels to comply with customer requirements.

Tennessee Pride uses a dedicated cold storage 3PL provider to distribute its products to retail customers. The 3PL did not have any RFID capabilities, which required Tennessee Pride to develop its own system to tag cases and cartons before they were transferred to the 3PL.

"We investigated and found it would cost us more in the long-term to outsource our RFID labeling. We knew it was best to bring RFID capability into our plant," says Mike Hader, director of information technologies at Odom's Tennessee Pride. "We were interested in using RFID not only to meet the mandate, but also to improve our own processes."

The company decided to go with Rush Tracking System, which integrated Zebra Technologies' printer/encoders and RFID middleware from OATSystems into Tennessee Pride's production lines and industrial control system. The system passes data from Tennessee Pride's ERP applications to a printer/encoder on the production line, which generates a carton label with bar code and human readable information, plus an EPCglobal Gen 2-standard RFID tag. An automated applicator from Weber Marking Systems then applies the smart label to the moving carton at production speeds.

After cartons are automatically labeled, the legacy conveyor and industrial control systems route them to the appropriate palletizing station. Once the pallet has been robotically stacked and wrapped, workers use a cart-mounted printer/encoder to produce the pallet label, which is hand-applied. Labeled pallets are then brought through an RFID portal reader from Motorola for order validation prior to releasing them for shipment. The result has been that Tennessee Pride met its goal of compliance without compromise. Legacy operations continue to run as quickly and efficiently as before, and the RFID system is running even more smoothly than Hader expected.